Diane Victor
by
Weighing and Wanting 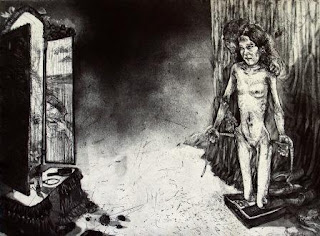 "Is it too much to ask that women be spared the daily struggle for superhuman beauty in order to offer it to the caresses of a sub-humanly ugly mate?" - Germaine Greer, Academician

Diane’s determination to remain unbound to any one institution in a preference for flexible teaching, ties to her belief in cross-pollination between departments being more effective for her than administrative bondage to any one. This has allowed Diane the freedom to continue almost full time with her own personal art making processes and commissioned work.

She received the ABSA Atelier Award in 1988 granting ten months’ work and stay in Paris. Other residencies include a UNESCO residency in Vienna in 1999, a residency from Ampersand Foundation to New York City in 1998 and Vermont studio in the USA in 2002. Diane has had four solo shows at the Goodman Gallery since 1992 and exhibits consistently in South Africa and internationally.

The old woman behind the pharmacy counter
passes forward a brown paper packet, her
shrivelled hands mottled, liver-spotted;
the accusatory, tight-lipped mien pronounces,
You young women destroy your health.
Listen Ouma, you're tempted to explain,
you don't know the half of it.
Instead, you smile, fade to nothing,
concentrate on crackling paper, your fingers
fidgety, thin-skinned animals.
Consecrated capsule on outstretched tongue,
squatting in a darkened room, you receive
the Holy Sacrament for Hungry Girls;
a private Eucharist to appease
your bare boned God of Reduction.
Give me this day my daily resolve,
the grace not to let a single morsel
pass through these lips,
amen.
After mass, spiritual ebullience: dry mouth
dizziness jaw-clenching palpitations…
Clutching the rosary of your martyrdom,
speedy strong in occult absolution,
you shrug with the insouciance
of the pardoned penitent;
every true believer pays a price.

A Brief Biography of Michelle McGrane

Born in 1974 in Zimbabwe, Michelle McGrane spent her childhood in Malawi, and moved to South Africa with her family when she was fourteen. She has lived in Pietermaritzburg since 1988. Michelle has published two collections of poetry, Fireflies & Blazing Stars (2002) and Hybrid (2003). She was the recipient of the South African Writers' Circle Hilde Slinger Poetry Award in 2003 and the Quill Award in 2004.

Her poems have been published in local literary journals such as Fidelities, Botsotso, Kotaz, LitNet and Timbila as well as internationally in the United Kingdom, America and Canada. Michelle is dedicated to promoting South African writing and has a strong commitment to developing her work and the work of other writers.

She was involved as a mentor in the Agenda Feminist Media Project Creative Writing Programme in 2004 and was a participant in the Centre for the Book's Turning the Page festival of emerging South African writers held in 2004.
Posted by AFH at 11:53 PM