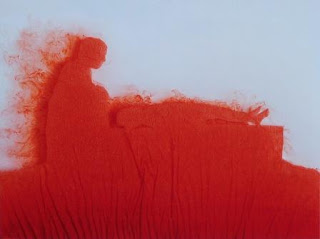 "How important it is for us to recognize and celebrate our heroes and she-roes!" - Maya Angelou, African American Poet

Born in 1964 in Cape Town, Berni Searle is best known for producing digital video and lens based media installations. Her work references ongoing explorations around issues of self-representation, personal and collective identity. Berni was short listed for the international Artes Mundi award in 2004 and in 2003 she was presented locally with the prestigious Standard Bank Young Artist award. That resulted with a solo exhibition, Float that toured nationally until 2004.

Other solo exhibitions that Berni has participated in include, A Matter of Time at the UC Berkeley (2003), Presence at the Speed Museum, Louisville (2005) and About to Forget at Michael Stevenson Contemporary, Cape Town (2005). Her most recent group exhibitions include, Hang In There, My Dear Geum-Sun, Busan Biennale at the Busan Metropolitan Art Meseum, Seoul (2004); Min(e)dfields at the Kunsthaus Baselland, Basel (2004); the fifth Shanghai Biennale at the Shanghai Art Museum in China (2004) and the 'Always a Little Further' at the 51st Venice Biennale (2005).

War Triptych: Silence, Glory, Love
Gabeba Baderoon
I. Accounting
The mother asked to stay.
She looked at her silent child.
I was waiting for you.
The quiet of the girl’s face was a different quiet.
Her hands lay untouched by death.
The washer of bodies cut
away her long, black dress.
Blue prayer beads fell
to the floor in a slow accounting.
The washer of bodies began to sing
a prayer to mothers and daughters.
The mother said,
who will wait for me.
II. Father Receives News His Son Died in the Intifada
When he heard the news, Mr Karim became silent.
He did not look at the cameras,
nor at the people who brought their grief.
He felt a hand slip from his hand,
a small unclasping,
and for that, he refused the solace of glory.
III. Always for the First Time
We tell our stories of war like stories
of love, innocent as eggs.
But we will meet memory again
at the wall around our city,
always for the first time.

A Brief Biography on Gabeba Baderoon

Gabeba Baderoon is the author of three collections of poetry, The Dream in the Next Body (Kwela/Snailpress, 2005), The Museum of Ordinary Life (DaimlerChrysler, 2005) and A hundred silences (Kwela/Snailpress, 2006). Her poems appear in the anthologies Worldscapes (Oxford University Press, 2005), Ten Hallam Poets (Mews Press, 2005), Voices from All Over (Oxford University Press, 2006) and Birds in Words (Umuzi/Random House, 2006) and her short fiction is included in Twist (Oshun, 2006).

Gabeba is the recipient of the DaimlerChrysler Award for South African Poetry 2005 and held the Guest Writer Fellowship at the Nordic Africa Institute in 2005. Her debut collection, The Dream in the Next Body was named a Notable Book of 2005 by the Sunday Independent and A hundred silences was selected for Homebru 2006 by Exclusive Books. Both the The Dream in the Next Body and A hundred silences were Sunday Times Recommended Books.Gabeba has been a featured poet in the 16 Days of Activism readings, and at Poetry Africa, Weltklang in Berlin, the Stockholm Poetry Festival, Poetry International in Rotterdam and London and the Bristol Poetry Festival.
Posted by AFH at 9:51 PM