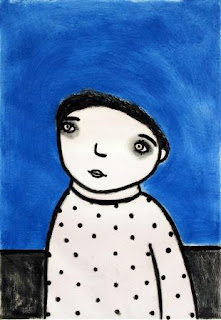 Drawing and painting has been a life long passion for Este Macleod who was born in Pretoria in 1968. In 1994 she obtained a Higher National Diploma in Textile Design at the Pretoria Technikon. At that time she was also studying fine arts with ceramics, printmaking and jewellery design as subjects. Since then she has been working mainly as a studio cramicist and painter. She does book illustrations and jewellery design, works on commissions and projects, takes part in group and solo exhibitions and occasionally holds workshops.

Este's love for travelling and exposure to various cultures has served as inspiration for her work. She currently lives on a farm with her husband and son close to Henley-on-Thames in England. At present, she is continuing her studies in ceramics and glass and works as an artist.

A CHILD DREAMING
English translation: Zandra Bezuidenhout
I am a child of many dreams:
I’d love to be a soaring eagle
or a lofty yellowwood tree.
Wonders might happen
if I am treated with respect,
as children’s rights are rooted
in a moral alphabet.
I pray that you will from today
respect my life in every way,
that I may grow and flourish fearlessly
until one day I do become
the person I was meant to be.

A Brief Biography of Zandra Bezuidenhout

Zandra Bezuidenhout (1945- ) was born in the Strand, Western Cape. She studied at the University of Stellenbosch and has been working in the teaching and language professions for many years. She and her husband have been married for 40 years and their three grown-up children remain their pride and joy. Zandra was awarded the Ingrid Jonker prize for poetry in 2001. After furthering her studies locally and in the Netherlands, when the children flew the nest, she obtained her doctorate in Afrikaans and Dutch literature in 2005.

Zandra works as a part-time lecturer, freelance journalist and translator. She loves music, theatre and art, and looks forward to compiling educational material related to languages and culture.
Posted by AFH at 1:02 AM