This Is My Story/Mary Mother of No-One


This Is My Story 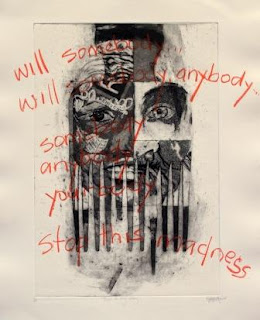 Day 16 of Women's month as we continue to salute the women who have dedicated themselves at making a change in our society by fighting for children's rights.

"I am an artist", that just about somes up Marjorie Maleka who was born in Vryburg in 1979 and grew up in the Free State under the guidance of her mother. She attended primary school at Reitz and secondary schooling at The Agricultural School of Seotlong. Marjorie art career began at Vaal Triangle Technikon in 1999 and she joined the Artist Proof Studio in 2001. She specialises in print-making and has participated in group exhibitions locally and abroad and now manages the Artist Proof Studio's Nhlanhla Xaba Gallery whilst in the process of learning Marketing and Sales.

Marjorie Maleka states that her work is about "human rights, with a focus on the rights of women". She combines printmaking, photography and collage in her work. Marjorie's long term goals include furthering her studies and becoming an artist as well as an art critic.

re-write themselves on my body

proclaim me the virginal cleanser

of heartache and dis-ease

while taking turns to fill me to the brim with same

my shrills swathed in regal stoles of collective silence

that have never walked,

i watch with a throat full of swallowed words

while my consent is sacrificed on alters to inconsiderate gods

it crushes the bones in my heart

that no one ever hears the

that drip out of the sides of my mouth

onto my pillow now gone deaf


A Brief Biography of Lindiwe Nkutha

Lindiwe Nkutha was born in Soweto to Mandla and Thandile Nkutha. Trained as an accountant and now working as a business development consultant, Lindiwe has come to heed the message that she has heard life whisper into her eyes and ears. She has spent most of her time honing her skills into various media, including photography and videography to complement her newly-acknowledged vocation to tell stories.

Some of her poetry has been published in feminist publications in the SADC region and read on stages of Jo'burg's underground poetry scene. A short film she made titled 'Muted Screams' was shown in South Africa and the United Kingdom. Her works as a photographer include 'This Way We Bleed' and 'Jocasta's Hairballs'.

Lindiwe's short stories appear in an anthology titled '180 degrees'. She is currently working on a novel.