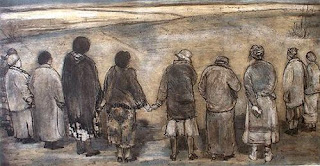 As the celebrations for Women's month continue, we salute the works of female social activists who have prided themselves at enriching the lives of others through their contributions in arts for humanity.


The life story of Kim Berman reads like an inspiring novel documented in pages of truimph over struggle. Having recieved academic creditation from noted institutions such as Tufts University, Massachusetts in the United States of America, this journeyful soul has made her mark in South Africa's art and humanity forums. Kim's journey dates back as far as 1992 when she and her late collegue Nhlanhla Xaba founded the Artist Proof Studios (APS), a community printmaking centre in Newtown. 11 years later the studio burnt down resulting in the tragic death of Nhlanhla Xaba and the loss of over 120 artist's work. However the unforseen tragedy did not stop Kim Berman from living out her vision as the Artists Proof Studios were rebuilt a year later through donor funding.
Apart from the APS project, Kim Berman was also involved in initiatives such as the Paper Prayers campaign an AIDS awareness program through the visual arts that currently operates out of the Artist Proof Studio as an income-generating activity for HIV positive groups of women.
Phumani Paper, a poverty alleviation program that was funded by the government's Departme nt of Science & Technology is another one of Kim's successful projects that has had a solid 11 year run whilst creating hundreds of jobs through the production of paper-craft products. The research unit is currently developing the capacity to produce "proudly South African" archival cotton and sisal paper and board to supply the South African National Archives.
Kim Berman's credentials are of serious note as she has:
* Lectured & held exhibitions both locally and abroad
* Recieved an international fellowship for 2003/4 from Brandies University, USA to participate
in a programme on "Recasting Reconciliation through Culture & the Arts


* She is currently registering to do a doctorate on the role of the arts in social change in South
Africa.

A woman's heart is not just a heart
it is a well of great waters
giving life to each soul
when it turns to steel
life comes to a standstill.

How can her heart not turn to steel
when her man is eagerly awaiting death
eyeballs, cheek bones and rib cage protruding
coughing up a storm with lungs
devoured by the bowels of gold.

How can her nipple not calcify into a rock
when her daughter's womb
is violently thrust open
by cuts disguised as sex.

A woman's heart is not just a heart
It is a beginning
It is the end
When her heart turns to steel
life comes to a standstill
and a drop of breast milk
an ocean of blood.


Pelo ya mosadi ya tšhipi

Pelo ya mosadi ga se pelo fela
ke mathomo
ke bokhutlo
Ge pelo ya gagwe e fetogela botšhiping
bophelo bo a ema
gomme lerothi la matutu
e be lewatle la madi.
A brief bography of Mmatshilo Motsei:
Mmatshilo Motsei is a community organizer, author, poet and a mother of three. She was born in Lady Selborne, Pretoria and raised in rural North West province. She started her career as a nurse and midwife and moved on to become a nursing lecturer, social science researcher and a psychology graduate.
Over the past decade she has worked as a counselor, trainer, gender consultant and a rural development practitioner.Born of a family of spiritual healers, she was chosen against her will to continue with the legacy of healing.
As part of her healing process, she published a book titled Hearing Visions Seeing Voices (Jacana 2004). She is currently working on her second book, The Kanga and Kangaroo Courts: Reflections on the Jacob Zuma Trial (Jacana 2007).
Posted by AFH at 2:18 AM