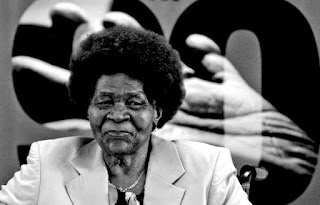 The late Albertina Sisulu was monumental in the fight for women's rights.

Following a series of articles AFH (Art for Humanity) has posted paying tribute to all the women that have used their gifts and trades to promote social responsibility and awareness in child welfare and human rights, we continue to honour them in the dawn of a day that celebrates their presence in this world and the contributions they have made in improving the livelihood of our society.

It's been 55 years since that historic moment when the women of South Africa joined forces and took to the streets to petition against pass laws (legislation that required African persons to carry a document on them to prove that they were allowed to enter a 'whites only' area). The course of events for that day did not only enforce justice for women in South Africa but it changed the course of history that led up to a democratic society we now co-exist in. Today, through various projects that have been established both independently and commercially, the works of the women who have been responsible for making a contribution towards the em-betterment of our country, haven't gone unnoticed. Art for Humanity (AFH) is proud to have payed tribute to the women who continue to uphold the legacy that was initiated on 9 August 1956 through the publication Look at Me - Women Artists And Poets Advocate Children's Rights.

On this historic day of note, we embrace the winds of change that have been brought about by the female forms of this country in their brave efforts that have empowered them to be recognised far beyond the cliched stereotypical misconceptions they have lived under for decades before earning their rightful place in society as equals in any level of co-existence.

Rest in Peace Nontsikelelo Albertina Sisulu. Your legacy lives on.