Children Should Be Seen And Heard/My World In Mama's Hands

Children Should Be Seen And Heard
by
Avitha Sooful 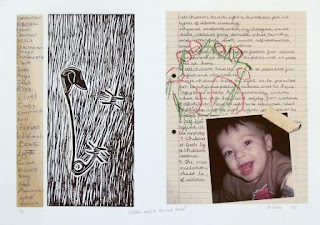 "I decided it is better to scream. Silence is the real crime against humanity" - Nadezhda Mandelstam, Russian writer, Hope Against Hope

Avi Sooful holds a Masters degree in Fine Art from the University of KwaZulu-Natal, Durban. She is currently a senior lecturer at the Vaal University of Technology, Vanderbijlpark. She has participated in various exhibitions nationally and internationally. Her most recent exhibition was at the Cité Internationalle des Arts, Paris.

A Brief Biography Of Lebogang Mashile

Lebo takes on social debate and it is reflected in her continually increasing body of work. In 2004, Lebo debuted as a film actress in the Academy Award Nominated Hotel Rwanda, directed by Terry George. Also in 2004, Mashile became executive producer and presenter of the SABC 1 documentary series L’Attitude, now in its third season.

Lebo Mashile was named by Cosmopolitan Magazine, as one of South Africa’s Awesome Women of 2005.
Posted by AFH at 10:40 PM