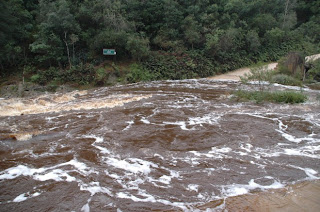 11 kids all under the age of 12 were killed in a bus accident that happened between Knysna and Sedgefield in Southern Cape yesterday morning. The driver lost control of the bus and crashed into the Knysna bridge into the river. The rear end of the bus was the only part left sticking out. The survivors were rushed to hospital to be treated for injuries. Divers were at the scene in search of more bodies while the police investigated the matter further.

The tragedy will be a tough pill to swallow for the mother's of the children that were lost in the accident as it has never been a sign of good fortune for a mother to bury her own child. AFH sends it condolences to the families of the victims in this time of difficulty.
Posted by AFH at 3:16 AM