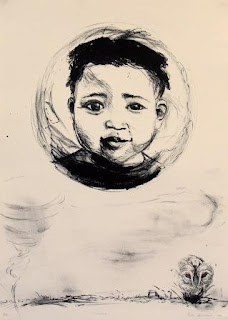 "I am prepared to sacrifice every so-called privilege I possess in order to have a few rights." -
Inez Milholland, Suffragist 1909

Pontso Sikhosana started her art career in 1992 during her matric year. She later enrolled at the Funda Centre (AIA) in Soweto where she completed her 3 year diploma in Fine Arts under the supervision of Charles Nkosi. Pontso went on to join the Artist Proof Studio in Newtown Johannesburg where she started printmaking. It was at this point she realised she wanted to be an artist. Under the mentorship of Aileen Foti and Kim Berman, Pontso grew her skills and qualified as a printmaker.

Apart from working and collaborating with different artists, Pontso has also been involved in a number of print exchanges such as the Sharpeville Exchange. She has also collaborated with other women artists on the Doll Project, which dealt with raising awareness of child abuse.

Sindisiwe
Arja Salafranca
Raising my camera,
you hide your sign,
again and again.
I look through the viewfinder,
but you’re too quick,
the minute I click,
you pull your sign away.
You won’t let me take your photo with a sign
that places you at somewhere at the bottom,
asking for money.
Even when a woman rolls down her car window
to palm change into your hand,
your sign is hidden,
a slightly puzzled smile on your six-year-old face.
Your mother sits on the opposite side of a busy thoroughfare,
She’s been there for years.
Children like you have been begging there for years.
You may even have been there since you were a baby
on your mother’s back.

A Brief Biography on Arja Salafranca

Arja Salafranca was born in 1971 in Spain to a Spanish father and a South African mother. She has lived in South Africa since the age of five. In 1993 she received a degree in African Literature and Psychology from the University of the Witwatersrand. She has had fiction and poetry published in a number of local journals and anthologies, including The Finishing Touch (Cosaw, 1992), Like a House on Fire (Cosaw 1994), LyfSpel/BodyPlay (Kagiso, 1994), The Torn Veil (1998) and in In the Rapids (Kwela 2001).

Her first poetry collection, A life stripped of illusions, received the 1994 Sanlam Award for poetry, while a short story, ‘Couple on the Beach’ was a winner of the same award in 1999 for short fiction. Her second collection of poetry, The fire in which we burn, was published in 2000. A collection of prose and poetry, Glass Jars Among Trees, which she edited with the poet Alan Finlay, was published in 2003 by Jacana. Arja has worked for various newspapers in Johannesburg and now edits the Sunday Life supplement in The Sunday Independent.
Posted by AFH at 10:37 PM