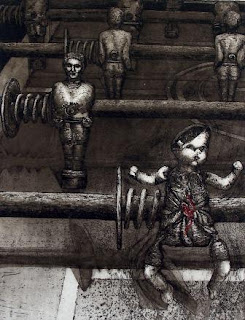 The strength of a woman is embodied in the work she's done in shaping our society into a perfect place of harmony where each & every can co-exist peacefully.

The East London born and breaded Kerry-Lyn Potgieter is a well travelled spirit that has journeyed extensively throughout the United Kingdom, Europe and the Middle East. She has produced work at Edinburgh Printmakers and at Oxford Printmakers, whilst developing her skills in the art of metal etchings. Kerry-Lyn currently resides in her place of birth and lecturing in the Department of Art and Design at the Buffalo City Public FET College, satellite campus of the Nelson Mandela Metropolitan University.

The Buffalo City Community Art Project is a project that Kerry-Lyn developed and initiated with the Salted Lines: Image from the Mouth of the Buffalo Exhibition being the resultant. The exhibition was showcased at the third Impact International Printmaking Conference in Cape Town. The purpose behind the project was to impart knowledge, whilst promoting skills development and training. Kerry-Lyn has been involved in many art-related projects within the educational sector, privately as well as with artists affiliated with the David Krut Printmaking studio in Johannesburg. She has participated in numerous exhibitions and international printmaking conferences.

Groote Schuur Paediatric
Liesl Jobson
The mountain is gone
under grey sandwich clouds
and I’m waiting, Mama.
Baby repairs won’t fly
this time. The policeman
prodded Uncle, took him away.
I’m going down too.
I can’t walk another
twist and bump day
on this push me pull
poke heavy weather path.
Slap ‘n tickle games aren’t funny.
I can’t take a joke.
Game’s over; you coming now?
I’m waiting at the hospital, Mama.

A Brief Biography on Liesl Jobson

She was the focus poet in Timbila 2005 and The Hiss Quarterly (August 2005). Her poetry is featured at Southern Rain Poetry and she won the POWA Women's Writing Poetry Competition (2005) and the Inglis House Poetry Contest in 2003. She edits poetry for Mad Hatters’ Review and was nominated for a Pushcart Prize in 2005. Liesl received the 2006 Ernst van Heerden Award from the University of the Witwatersrand, where she completed an MA in Creative Writing.