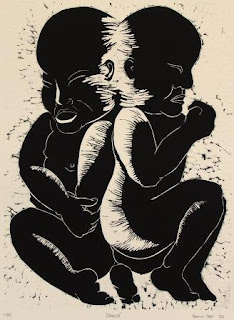 It's a beautiful Thursday morning, day 11 of Women's month as the celebrations continue in honouring the works of all the women that have been active in the fight for children's rights.

The Scotland native of Aberdeen, Yasmin Flett born in 1983 is an honours graduate in illustration and design at the Duncan of Jordanstone College of Art and Design, University of Dundee, Scotland in 2005. She's been invited to be Artist in Residence with the Natural History Society of the University of Dundee, where she visited Trinidad for five weeks to investigate the environmental impact on the native species and this was followed by an exhibition at the University.

In 2004, Flett was involved in voluntary work at the New Kirkcudbright International Arts Festival, Kirkcdbright, Dumfries and Galloway, where she worked with a team in the running of the festival. At the end of 2003, Flett was invited by the Senior Geologist of Concoco Philips to visit Dubai, United Arab Emirates to examine Arabic approaches to art. In 2006, Yasmin moved to Brighton England where she works as a freelance illustrator.

Janus
Jennifer Scott
Do you see that picture?
That’s me when I was born.
Not exactly beautiful – all tiny eyes and wrinkled skin
Fists reaching out blindly, and two chubby bald heads.
Two! They look like eggs
My mama drew it.
I’ve heard about this picture, but I haven’t seen it before
Until now.
And now I’m like a baby again, trying to make sense of what I see
My mama said she drew it from life, that means it should be real
But like my mama used to say
I’m in two minds
I can try to remember myself, lying there
Fidgeting in the darkness
With mama’s booming laugh and daddy’s fiery temper still zipped up inside
Maybe I wasn’t thinking of anything,
Perhaps I was like a blank slate
Waiting to be drawn on.
I remember when I was small I used to believe that
Anything was possible
Every holiday I played on the cannon at Blood River
It was the sweat and blood of my people caking that gun
But mama I want it to be a rocket
I said.
The night sky outside my house is very big
So is my imagination!
I never did reach the moon yet, mama explained that it’s a long way
I learnt a lot from my mama
She said she has been learning from me since I was born
But what can you learn from a baby?

A Brief Biography on Jennifer Scott

Jennifer Scott from Kirkcudbright, Scotland received a BA Geography from Hertford College, University of Oxford in 2004. Since 2005 Jennifer has been working as a Community Consultation Facilitator for the UNDP in the Maldives. Jennifer was recently published in the Scottish Journal for Human Rights with an article on ‘Human Rights and Liberia’ and an interview with prominent exiled Liberian human rights lawyer, Tiawan Gongloe.

From 2003 to 2004 Jennifer was a student teacher at the Oxford-based Non-Governmental Organisation ‘Jacari’ which consisted of her being closely involved in helping the families of recent immigrants and asylum seekers to settle in the United Kingdom. She enjoyed the challenges and rewards of giving weekly English tuition to an 8 year-old Muslim boy from a non-English speaking family.
Posted by AFH at 11:59 PM