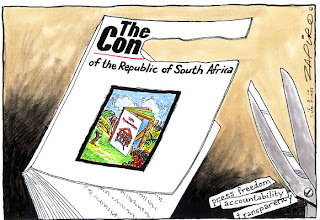 by Njabulo Ngobese
Image by Zapiro
It’s been an ongoing battle between the South African media and government about the proposed legislation of the Protection of Information Bill which hasn’t reached its decisive ruling. Contradictory to its grassroots policy of protecting and fighting for human rights, the ANC has apparently lost the plot in its ongoing journey of rectifying the injustices of the past government. Previous policies are now coming into play as the media has been put on a chokehold to censor any information that might prove to be detrimental to the reputation of the state. At what cost though as the question has been posed to the government’s rulings on the matter. Could it be that we are now entering the realm of a system of social injustice that is designed to protect and preserve the criminal minded figures in blue collar corruption? The ones who hold the answers to those questions are currently waging war at each other with the audience being the recipients and barriers of the final verdict.
It’s no surprise at all, that the South African government found it convenient to suppress its first threat to its agendas, the media. Known for its influential power on the general public, it was only a matter of time before civilians exercised their democratic right of rebelling against a corrupt government that has earned a reputation for squandering state funds. The proposed legislation of the Protection of Information Bill was initiated on the false basis of protecting and serving the interest of South Africans. However, the rejection of the bill by members of the media and general public, made it evident that the state was acting in its own interest.
The biggest victims should the final decision swing in the government’s favour, will be those blinded by the lack of information of what the state does with money that is suppose to serve its people. The slogan that won the ruling party a position of power back in 1994 “A better life for all” has now become a myth. It’s every South African’s responsibility to reject the Protection of Information Bill in the name of civil justice.
Posted by AFH at 12:06 AM