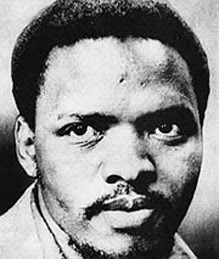 by Njabulo Ngobese
Heritage months pays homage and respect to a fallen soldier who fought for the liberation of our country during the apartheid regime, Steven Bantu Biko.
"Black is beautiful", the famous slogan the late anti-apartheid activist Stephen Bantu Biko was known for still bears relevance in today's times where the loss of cultural identity remains a threat in the current generation of black youths.
Born in King Williams Town in the Eastern Cape, South Africa in 1946, Steve Biko showed early signs of political activism through his expulsion from Lovedale High School. Although still in his youth, Biko was already motivated to challenge a system of social injustice he felt had a negative connotation on black society. NUSAS (National Union of South African Students) was a multiracial politically moderate organisation that Steve Biko first joined while in Medical School. Firm on his beliefs to give people of colour a voice of their own, Biko went on to form SASO (South African Student Organisation) which eventually revolved to become BCM (Black Conscience Movement). Steve Biko was elected as the organisation's first president.
It wasn't long before Steve Biko's name became the centre of attention in the South African government books. Posing a threat to a system he was adamant on destroying, Biko was ruled out as a terrorist by the government. Numerous efforts were made to shut down his political activities as countless arrests & detentions by the police became a norm for Biko. His calling as an anti-apartheid activist however came to a tragic end. On September 12 1977, Stephen Bantu Biko was killed while in the custody of police after being interrogated, starved and brutally beaten. An autopsy conducted after his death confirmed that he died of brain lesions. His funeral was attended by thousands and thousands of masses who bided farewell to a soldier who fought for a now liberated South Africa.
We salute you Stephen Bantu Biko.
Posted by AFH at 10:33 PM