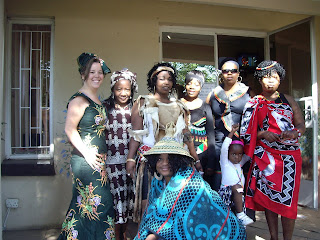 by Njabulo Ngobese
The westernisation of black society has over the years resulted in several cultural rituals being sidelined for practice. The use of traditional healing methods has been subjected to be demonic practice according to Christianity, a faith that has seized its dominance in black society since it's first arrival in Africa. Today's generation of black youths, stands as a reflection of what has been considered by elders as the lost generation. They destitute any knowledge of self.
The most hypocritical act according to a philosophy student I recently interviewed, lies in certain races embracing and celebrating heritage month without any knowledge of their cultural background. "Nowadays it's become a trend to follow the wave and scream 'heritage month' just because it's noted in our calender. If the day was not publicized as much, very few people would actually get into the spirit of celebrating the occasion" says Khondlo Mtshali who has strong views about today's black society lacking knowledge of their culture. One might argue though that Khondlo's argument is one sided and only points out to one specific race group. A coloured girl once brought something to my attention that I found to be quite interesting. She stated that the coloured race in South Africa has no historic origin that they can identify with. Being a "mixed breed" has made it extremely hard for them to find some form of grounding and cultural background.
So the question arises, what is the purpose of celebrating heritage day if today's generation being the future leaders of this country have very little or no knowledge at all of their grassroots? Perhaps the month should be used to it's fullest capacity to educate and cultivate the youth of their origins.
Posted by AFH at 11:13 PM