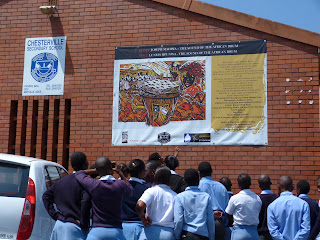 The first Art and Social Justice workshop hosted by Art for Humanity at the Chesterville Secondary school on the 12 October 2011 proved to be a great success.

The Workshops which are an annual event, was funded by the eThekwini Municipality for Celebrate Durban which is a festival hosted by the Municipality for Heritage month. The Art and Social Justice workshops which were previously called the School Banner workshop, consists of a large banner being posted on the schools building. At Chestervill Secondary the banner consisted of the artwork by Joseph Madisia and poem by Luness Mpunwa both entitled ‘The Sound of the African Drum.’

The workshop began with AFH Director Jan Jordaan giving a brief introduction to the 36 learners who participated in the workshop. The learners ages varied from 13 to 17 all belonged to Grade 9. Malethu Langa, a facilitator at the workshop and 4th year fine art student at the Durban University of Technology addressed the learners on the power of art and poetry and how through the medium of art, human rights can be advocated. Eugene Raphalane from the South African Human Rights Commission then took the floor, informing the learners in their home language (Zulu) about their rights and how they have a responsibility to not only know their right but also respect them. The interested learners had many questions for Raphalane and were keen to learn more about their rights.

Learners were taken outside to where the banner was placed, where workshop participant, Nosipho Khomo (16) recited the poem to the audience followed by Poet Topaz who began interacting with the students to hear their views on the message portrayed through the ‘The Sound of the African Drum.’ Learners were not afraid to voice their opinions; one learner pointing out that the sun in the image could be used as a metaphor for ‘The light at the end of the tunnel’ as the artwork symbolizes the unity of Africa.

The students were then taken back to the classroom and split into two groups of 18 where one group did drawing whilst the other wrote poetry, after 15 minutes, the groups’ swapped activities. During the workshop AFH Journalists, Thireshni Sanasy and Njabulo Ngobese interviewed, photographed and filmed the learners. The workshop allowed the learners to freely express themselves and their work varied from the portrayal of their own emotions to social injustices that worry them. Arts and Culture educator at Chesterville Secondary Mrs Thipe, said, “I think this kind of workshop will allow the learners to express themselves in art and poetry. Learners need to be skilled in poetry and art, it is vital. They have to design whatever elements there are in poetry and art so that their own feelings can be expressed through the different mediums.”

During the workshop learners seemed eager to express themselves, and many enjoyed the activities given to them. 15 year old Smangale Shezi wrote a poem entitled ‘The motivation’ expressing her own values and writing about the effects of motivation on an individual and the necessity of it in a person’s life. Shezi said, “I like motivating those around me because I am very motive and I know its power.”

Other learners focused on the negative aspects that effect human society such as HIV/AIDS. 14 year old Sbusiso Zungu wrote his poem on how it is vital for people to be aware of the epidemic. “I want everyone to be informed about HIV Aids. People have a choice.” Zungu added that he thoroughly enjoyed the workshop and had learnt about how important freedom is from the banner placed on the school building.

During the workshops students also took the drawing aspect seriously, and many drew images that had a deeper meaning or metaphor. was about the fact that South Africa is being “sold” to other countries and that injustice is rife among us. Shinga said, “I chose to draw about the African Nation because we just experienced Heritage Day and money deals with the African Nation being sold to other countries which isn’t something any African person would feel good about.” Mondli Magaqo (16) also decided to draw about South Africa. Entitled “Vuka Afrika Shaya Izanla” was an image of the sun, a hut, a river and the mountains. Magoqo said that it was a metaphor for the fact that when the sun rises, light comes in and people need to wake and go to work, Magaqo said, “I drew the sun because lots of people need to go to work, and it is the sun that brings in a new day, so a new day of work.” He added that he got his inspiration of the picture from “The Sound of the African Drum” by Jospeh Madisia on the school banner. “Just like the sun brings in light on the banner picture, the sun in my picture also brings light and a new day.”

The learners then presented their work to the class. 8 of the learners individually took to the stage and presented their art to the class, whilst reciting their poem. The depth of which the learners wrote was indescribable. 17 year old Snethemba Lukshozi presented her poem, instilling the belief in her fellow class mates, that ‘love has no shame’. Nonjabulo Zondi (15) was passionate in her presentation of the importance of a person’s name, and how she is and always will be proud of her own name.

The workshop concluded with Topaz reciting more poetry to an audience of awed learners.

To view more information on the artwork/poetry presented on the banner, please follow the link here http://www.afhsaportfolio.co.za/joseph-madisia-artist-and-luness-mpunwa-mhlope-poet-namibia/