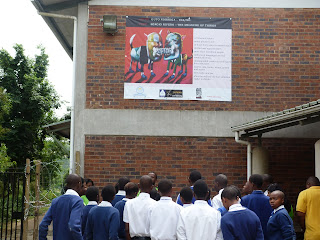 A warm reception from Chesterville Extension staff members and pupils promised a fruitful outcome on the day’s events as far as the Art and Social Justice Workshop was concerned. AFH was once again excited to engage lovers of art and poetry in an experience that was giving them a chance to express themselves freely without any boundaries or limitations. 23 students at Grade 9 level were going to be the centre of attention during the course of the workshop as Miss Mgadi initiated the day’s program by addressing the participants on this AFH initiative. Jan Jordaan the director of AFH (Art for Humanity) was then given a chance to introduce himself and his team as well as the work they were there to carry out. In his introductory speech, he spoke of freedom and how it can influence one’s thought process when creating their art and poetry. Eugene Raphalane from the Human Rights Commission then took over from Jan as he addressed the Chesterville Extension pupils on the importance of Children’s Rights. Bearing emphasis on Chapter 2 – 28 Section 28 on the constitution, he elaborated on children’s rights to living under a safe and protected environment. He also touched on children’s rights to attaining an adequate education regardless of race or gender. Most importantly, Raphalane noted in his address that with rights comes responsibility.

The Chesterville Extension workshop participants were then led by the AFH team to the banner chosen by the school pupils themselves with artwork from Guto Nobrega titled Yes No & a poetry piece titled The Measure of Things by Sergio Rivero. After analysing the work presented on the banner, a question was then posed to the pupils to give their own personal interpretation of the pieces. Silungile Mqadi viewed the work to be a representation of choice and responsibility. “The use of different colours represents different races and the two dogs are the alter egos of one person and their ‘yes, no’ dilemma. Phelele Gwala also passed thought provoking commentary on the artwork as he made mention of the fact that animals live through the ‘survival of the fittest’ tactic, where as humans have a ‘maybe’ option.

It was back in the classroom where Lethu Langa passed out instructions to the pupils on their required tasks for the workshop. Shortly after, work was in session as the Grade 9 Chesterville Extension pupils took to their drawing boards displaying a full array of creativity in their art and poetry. During the creative session we managed to speak to Ms. N.H Mngazi who informed us about the relevance and importance of AFH’s initiave and how much it means to the workshop’s participants. She also made mention of the importance of art and poetry and the freedom it grants an individual to express themselves.

The presentations of the art work and poetry were kick started by Sthembile Mkhize who delivered a poem titled African Women that was according to him inspired by his mother. “She feeds me with good advice. When I was young, it was my mother that shaped me into what I am today” as Sthembile further elaborated on his heart warming piece. Nothando Ngubo was next in line with an artistic piece that addressed a serious humanitarian crisis on our hands, Climate Change. Nothando explained how pollution has contributed to the social decay in society as one of her family members suffered an asthma attack as a result of cooking on wood. She also made quite an impression with her awareness of the COP 17 summit that will be gracing Durban shores soon. Other students who displayed their work included Sibusiso Bohlela with a piece titled iBhasi, Zwelakhe Mbambo with Facing Problems in Life, Philani Mngadi with My Mind Battle with Earth, Sibahle Shozi – You’re Born Freely, Zama Makono – Future & many more.

After a hard day’s work, the pupils were then served with refreshments as Jan Jordaan gave his note of thanks to Chesterville Extension for their participation in the program.

For more information on the artwork & poetry presented on the banner please click on the link here http://www.afhsaportfolio.co.za/guto-nubrega-artsit-and-sergio-rivero-poet-brazil/