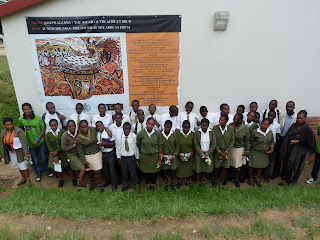 The Ziphathele group proved to be quite a reserved bunch at first. Overwhelmed with the anxiety of finding out what the initiative was about, AFH director Jan Jordaan eased them into the picture as he swiftly introduced the Art for Humanity team and went on to explain their visit to the school. In his brief introductory presentation, Mr Jordaan encouraged the concept of ‘imagination’ and ‘dreams’ amongst the attendants of the Art and Social Justice Workshop. He explained how the two can be merged together to produce artistry both in writing and drawing. Eugene Raphalane of the Human Rights Commission took over after Jan Jordaan as he addressed the full class of art aspirants on the relationship between rights and responsibilities. “With every right presented comes a responsibility with it”. Those were the noted sentiments of Eugene Raphalane who encouraged pupils not to abuse their rights and learn to take responsibility for themselves.

Topaz then took the students outside to the school wall where the AFH banner featuring the works of artist Joseph Madisia and poet Luness Mpunwa was located. The Sound of the African Drum was the art work and poem being analysed by the students. Simultaneously reciting the poem, the pupils grabbed the attention of passing students as they momentarily became the centre of attention at Ziphathele. Each participant of the school workshop gave their personal analysis of the poem with Topaz giving his last thoughts on the piece before everyone headed back to the classroom.

After being presented with tools to unleash their creativity, the Ziphathele group went to work. 14 year old Nonhlanhla Xaba was knee deep in her poetry piece about a man who broke her mother’s heart. She expressed her joy on the presence of the school workshop at Ziphathele.

“The workshop is an opportunity for us to voice our talents. I’m not an artist in drawings but I am in my writings”, says Pamela Sibiya who was also enthused by the presence of AFH and their initiative.

When it came to drawings, Luyanda Mnika caught the eye of our experts with his piece simply titled iKhaya Lakho (Your Home). According to the 17 year old Luyanda, inner guidance is what has propelled him to produce the work he’s done. He went on to express the importance of the school workshop and how much it adds to the upliftment of their passion for art.

The presentations were breathtakingly beautiful. Pamela Sibiya led the pact with her poem I Am A Women followed by Marareni Busisiwe’s piece titled Pollution. Bonginkosi Goba showcased his offering titled Poverty and gave room to Atlang Maletsane who presented her work titled Washa Muntu Omusha. But the highlight of possibly the entire journey of school workshops we had been through was the bravery of Grade 8 pupil Monde Mabizela who disclosed her HIV status with a poem titled Ngiphila Kabuhlungu Emhlabeni (I Live in Hardship in this World). It was an emotional moment that caught everyone off guard as the poem became too much for Monde to read out to everyone. Thanks to the assistance and motherly care of AFH staff member Lungile Gumede, Monde’s heartfelt piece was read out by Lungile.

After all the presentations were completed, refreshments were served to the Ziphathele pupils and were given a dose of that Topaz magic as he delivered a highly charged piece that left the attendants of the workshop yearning for more. We also managed to speak to Ms. Majola who had been supervising the workshop on behalf of Ziphathele. She shared her thoughts on the importance of the AFH initiative and how much it can enhance art amongst the students. “Learners are creative but they need workshops like this to allow their creativity to be set free” as she further elaborated.

Banner: Artwork: Joseph Madisia (The Sound of the African Drum)

From the Dialogue Amongst Civilization Catalogue

To view more information on the artwork/poetry presented on the banner, please follow the link here http://www.afhsaportfolio.co.za/joseph-madisia-artist-and-luness-mpunwa-mhlope-poet-namibia/