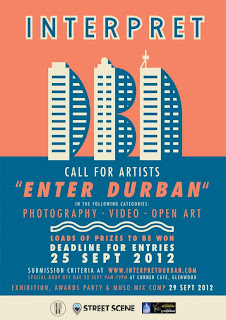 Interpret Durban is a contest for the creative mind that runs through the whole of September, the main event is usually at the end of the month which brings together an award ceremony, exhibition of some of the works and stellar performances from some of Durban’s musical acts such as Fruit and Veggies and Coals of Juniper. This year the event will be held on the 29th of September at the Bat Centre with a whopping R160 000 worth of prizes.

The theme for this year is “ENTER DURBAN” where you are asked to consider the city “from a tourist’s perspective as someone approaching Durban with fresh eyes” and the categories are video, photography and t-shirt design (which is by invite only). Entries do close today on the 25th of September, so if you haven’t entered yet, now would be a good time.

The event is offering a free shuttle service to and from the Bat Centre on the night of the main event. The shuttle will begin the route from 6pm, starting at the KZNSA and making its way to “Cube” on Innes Rd and after it heads to the Bat Centre where passengers will be dropped off on the Esplanade and guided through the tunnel under the train tracks by INTERPRET DURBAN personnel. The shuttle will then go back around to KZNSA and start its rounds again.