A Burundian NOMAD
By nicole hodnett

The Bill of Human rights states that everyone has inherent dignity and the right to have their dignity respected and protected.  However, people around the world are constantly stripped of their dignity and left no choice but to flee their own countries.

An illuminating scent of roses escape the Emmanuel Cathedral Church as the holy water lay perfectly still in the right hand corner. A man who travelled four destinations to get to South Africa, Ladislas Nduwayezu, allows us to interview him in this serene setting as he talks about his enthralling but very challenging journey to South Africa.


What is your definition of a refugee?


It is a person who has left their homeland due to war, prosecution and in search of a better life. I left my country for all three reasons.


How many places have you had to flee to and from?


I have travelled to Zambia, Congo and Mozambique


Can you recall all your experiences?


I remember getting on a boat with my family to Zambia to escape; when we got there we were instantly swarmed by policeman asking us for bribes. We were all penniless thus being taken as slaves for a while. There were nights where I survived on as little as a plate of rice. We did however escape on a truck to the Congo. Life was hard there and I conquered all the hard times.


There wasn’t a day where you never experience policeman shooting at you. We often hid in classrooms during school time


It was a beautiful place that I only got to appreciate in South Africa. If I had my way I would visit that place again


What is your job title in South Africa?


I am a French correspondent to Emmanuel Cathedral and Home affairs for foreign refugees that enter the country.


It was as a security guard at Unisa .I found students to be very rude as they were selfish with tipping me that looked after their vehicles so well.


Were you welcomed to South Africa?


Yes, I describe him as the late, great Dennis Hurley that gave me everything I need to start my living here.


What are the basics received by Refugees when entering the country?


We give them food and clothes to keep them going. An initiative by the Dennis Hurley Pastoral Centre is to help out many people of the community as possible.


What were the first words you said to the late Dennis Hurley?


How is life for you today?


Life is good as I live with my wife and two kids very happily. 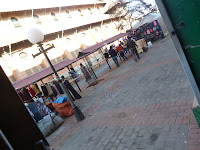 The vicinity of the Refugee Pastoral Centre
Posted by AFH at 5:11 AM